You see, chickens don’t have teeth, so they need to find something that will help them “chew” their food. And that something is grit. Grit refers to any small, hard object – like small rocks – that chickens happen to eat. Those objects are stored in the gizzard, which is the organ that uses those objects to grind food.

Chickens need grit if fed any food other than commercial poultry feeds. That’s because poultry feeds are soft enough for chickens to digest with only their saliva. But other foods need to be made smaller to pass through.

If the only thing your chickens eat is commercial poultry feeds, then no, they don’t need grit. Keep in mind that grit eventually gets broken down and digested much like food, so it needs to be replenished regularly.

What Is Chicken Grit Made Out Of?

There’s natural grit, granite grit, and calcium grit. Natural grit is the stuff that chickens pick up from their environment as they roam. Granite and calcium grit are what you can buy from the store to give your chickens.

Granite grit (also known as poultry grit) is made of crushed rocks. It’s insoluble, which means it doesn’t readily dissolve in the gizzard, and can be employed as the “blades” to grind food.

Calcium grit is usually made of crushed oyster shell. It’s soluble, which means it readily dissolves in the gizzard. Because of its solubility, it can’t be relied upon for grinding food. Instead, its function is to provide chickens with calcium. 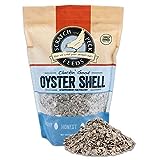 What Does Oyster Shell Do for Chickens?

Making eggs takes a lot of calcium. Even though commercial poultry feeds provide chickens with calcium, it’s usually not enough, especially not for the best laying hens. Oyster shells give your hens a much-needed boost of calcium in their diets.

If your hens don’t have enough calcium in their diets, their eggshells may crack easily, an egg may get stuck inside them (a potentially fatal condition called “egg binding”), and they may get osteoporosis because they have to take the required calcium from their bones to lay eggs. Providing your hens with oyster shell or some other form of calcium supplement (like limestone) prevents serious health problems.

Chicken Grit Plus Limestone Grit
Buy Now If you click this link and make a purchase, we earn a commission at no additional cost to you. Last updated 2023-02-06 at 12:25 (UTC).

Do You Mix Grit with Chicken Feed?

It’s not a good idea to mix grit with chicken feed. Mixing granite grit with feed causes waste because your chickens have to flick out the grit to get to their food, and vice versa. They’ll end up spilling a lot of everything.

Mixing calcium grit with feed is not a good idea either because other than your laying hens, the other members of your flock – the cockerels, roosters, or hens that aren’t laying – don’t require additional calcium in their diets. They may inadvertently gobble up the extra calcium, but too much calcium is a bad thing because it can cause kidney damage.

So How Do You Give Grit to Chickens?

You can put grit out at all times and not have to worry about overfeeding your chickens, as they will only take what they need. 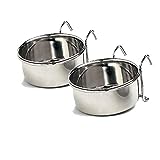 Even if your chickens roam, it’s a good idea to give them store-bought grit. The reason is that, depending on the land or whether they’re limited to one area, they may not be able to pick up enough natural grit on their own. And making grit available to them ensures that they’ll have some if needed.

When Do Chicks Need Grit?

Baby chicks need grit as soon as they’re given treats – that is, anything other than starter feeds. But they’ll need something called “starter grit”. Starter grit pellets are smaller than grit for adult chickens and are suitable for baby chicks 2 weeks and older. When your chickens are about 8 weeks old, they can switch to regular granite grit. 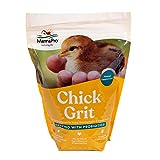 Never, we repeat, never give baby chicks calcium grit. They only need a tiny amount of calcium in their diets. Over that amount, they’ll suffer kidney damage. Baby chicks won’t touch the calcium grit that you put out for your hens (they may at the beginning due to curiosity), but keep an eye out in case they do!

Remember, grit helps break down food for digestion, but chickens don’t need grit if they’re fed nothing but commercial poultry feeds. Chickens can find their own grit if allowed to roam, but it’s a good idea to purchase some commercial grit for them just in case they don’t find enough. Finally, don’t forget to provide calcium grit to your laying hens to make sure they lay well! That’s about it!