Winter’s almost here. It’s going to be your first with chickens, and you’re wondering how you should care for them. Should you bring them inside? Buy a heat lamp? Learn to knit a chicken sweater on YouTube?

Before you jump over to YouTube, know that you don’t have to (and shouldn’t) do any of those things. Your chickens are able to handle the cold much better than they can handle the heat, and they’re naturally able to adapt to seasonal changes.

Chickens Can Stay Outside

Chickens can stay outside in the winter because they have great instincts and abilities to fend off the cold. What they do is insulate themselves from the cold using their feathers. When they feel cold, they’ll ruffle their feathers to create a blanket that’ll help them trap body heat.

You know they’re trying to stay warm when they appear all puffed up. You may even see them standing on one leg, tucking the other inside the “blanket” so that they can reduce the amount of heat loss.

A chicken sweater, although cute, is unnecessary. It’d be like wearing a sweater over another sweater. It may also confuse the chickens and disrupt their natural ability to self-regulate as the temperature changes.

The best thing you can do is help their bodies generate heat. You may notice that your chickens eat more in the winter than in the summer, not unlike us humans actually! When chickens digest food, they generate a ton of heat. It’s a good idea to feed them some high-energy scratch before bedtime so that they can digest the grains and keep warm throughout the winter night. 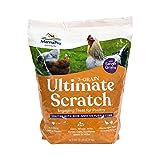 Manna Pro 7-Grain Ultimate Chicken Scratch
Buy Now If you click this link and make a purchase, we earn a commission at no additional cost to you. Last updated 2023-02-06 at 21:10 (UTC).

How Cold Is Too Cold?

Surely, chickens can’t stay outside if it gets too cold, right? What if temperatures drop to freezing? Surely, nobody can survive those temperatures, right?

Well, it depends on the breed. Generally speaking, when given the chance to acclimate, chickens can tolerate temperatures of 10°F (-12°C) or lower. And some breeds such as Australorp, Buckeye, Chantecler, Cochin, Orpington, or Plymouth Rock are more winter-hardy than others. They have thick, downy feathers that help them get through extreme winters no problem, be it Alaskan or Canadian winters where the temperature routinely dips many degrees below zero.

As we’ve said, chickens do well in the cold!

Say No to Heat Lamps

There are a couple of major reasons why you shouldn’t put a heat lamp (or space heater for that matter) in the coop. The first is that it affects your chickens’ ability to acclimate. Their bodies get confused – they wonder, why is it so warm in here and so cold out there? And that makes them vulnerable because they don’t know how to adapt.

The second reason has to do with safety. We’ve heard countless stories where chickens knock into or peck at heat lamps and space heaters, or how they’re installed incorrectly, and either the chickens electrocute themselves or start a fire.

Instead, “spot heating” with a flat-panel heater – just above where the chickens roost – is not a bad idea. It’s a safer option and you won’t heat up the whole coop. If you’re not entirely convinced that your chickens don’t need artificial heat, and you would like to provide them with a bit of warmth just in case, choose flat-panel heaters.

The important thing to remember is to avoid creating a huge contrast between inside and outside temperatures. Monitor the temperatures, and never raise temperatures inside the coop more than a few degrees.

How to Winterize a Coop

While your chickens can spend the winter outside, their well-being still depends on having a safe, winterized coop. Here are the things you should do to winterize a chicken coop:

Frostbite is an all too common problem for chickens in the winter, in spite of all your best efforts to keep moisture and wind away. Chickens can get frostbite on their combs, wattles, and feet. When that happens, place a warm, damp hand towel on the frostbitten area to thaw it out.

Never use a blow dryer to treat frostbite, as this would be utterly painful for them! After the area has thawed, apply Vetericyn to the area to encourage healing, relieve pain, and prevent infection.

…but there’s really nothing to be worried about. Your chickens are naturally better prepared for winter than we are. Just remember to stock up on extra feed and scratch, and provide them with a safe, winterized coop, and they’ll be all set.

There are way better things to learn on YouTube!