The non-volley zone (NVZ) rule in pickleball is a topic you may want to avoid discussing at the dinner table – at least before reading this article. While pickleball is a simple game, its NVZ rule often confuses players, is easily misunderstood, and may lead to an off-the-court argument!

Here, we’ll tell you everything you need to know about the NVZ rule, and give you examples of situations that may happen in a real game and tell you whether those count as faults.

What is the Non-Volley Zone Rule?

An act of volley takes into account your motion before and after striking the ball. If you hit a volley without touching the NVZ, but then your momentum (or follow-through) brings you into contact with the NVZ, it’s a fault! Also, let’s say one foot is touching the NVZ, and you lift it off the ground right before hitting a volley but without “resetting” your position by placing that foot on the surface outside the NVZ, it’s a fault!

Remember, the NVZ rule only applies to volleys. You can hit groundstrokes while in the NVZ, and there’s no rule saying you can’t stand in the NVZ!

Where & How Big is the Non-Volley Zone?

The NVZ is the area right at the net. It measures 7 feet by 20 feet on both sides. The important thing to remember is that the NVZ includes lines. You can’t touch them when volleying! 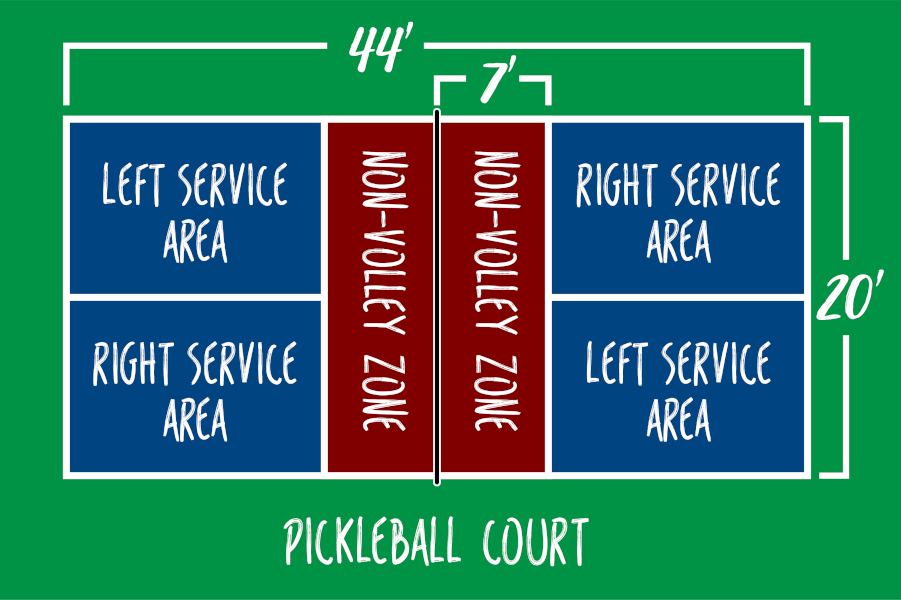 What Does the Non-Volley Zone Prevent?

You might be wondering, “Why do they even have a NVZ in pickleball? Why take away the volley near the net?”

There are two reasons the NVZ rule exists. The first is that it prevents injury to another player. After all, pickleball was designed to be a family-friendly game for all ages.

The second reason is to prolong rallies. If volleys were allowed near the net, each point would end too quickly. And that’s hardly any fun!

Now we’re going to go over some situations that may happen in a real game, and tell you whether those count as faults.

Is this a fault? No, it’s not a fault as long as you don’t touch your partner, their paddle, etc. If you volley and your swing causes your paddle, hand, etc. to touch any part of your partner – who is in the NVZ – then it’s a fault.

Is this a fault? No, because your partner is also outside the NVZ.

Is this a fault? Yes, a paddle counts as a “part” of the players and can’t touch the NVZ when volleying.

Is this a fault? Yes! Section 9.C.1. of the official rulebook states, “It is a fault even if the ball is declared dead before the player contacts the non-volley zone.” If this rule didn’t exist, players could legitimately hit their opponents to cause dead balls in order to avoid a NVZ fault!

Is this a fault? No! The NVZ is the two-dimensional surface on the court. You’re allowed to cross the airspace when volleying as long as you don’t touch the actual surface of the NVZ.

Is this a fault? No! If both your feet have contacted the surface outside the NVZ before hitting that volley, it’s not a fault because you’ve “reset” your position.

When playing without a referee, any player on the court can call a NVZ fault. You can call a fault on your own team (good on you!) or a fault on the other team. But if someone calls a fault and not everyone agrees, you replay the point.

Section 13.D.1.b. of the rulebook states, “Players may call NVZ faults and service foot faults on the opponent’s side of the court. If there is any disagreement among players about the called fault, a replay shall occur.”

This rule was actually updated in 2020. Up until 2019, when there was disagreement between the players on a NVZ fault, the benefit of the doubt went to the player who made the call.

But given the competitive nature of the sport, we’d still suggest leaving pickleball talk on the court and away from the dinner table. 😉