Compared to indoor balls, outdoor balls are larger, heavier, and harder. They have smaller holes and smoother plastic. These characteristics make them come off the paddle harder and faster, which results in more difficulty controlling the ball, shorter rallies, and a faster-paced game.

Another thing about outdoor balls is that – by being heavier and having smaller holes – they’re less affected by wind. But as you may imagine, the heavier and harder material makes them noisier than indoor balls. An outdoor ball weighs around 0.9 ounces.

The most popular outdoor balls are the Dura Fast 40, Onix Fuse G2, and TOP. 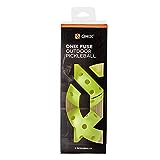 We can essentially talk about indoor balls as the exact opposite of outdoor balls. They’re smaller, lighter, softer, and have larger holes. They come off the paddle with more finesse and are easier to control. The result is a slower-paced game with longer rallies.

An indoor ball weighs around 0.8 ounces. The most popular indoor balls are Jugs, Onix Fuse,  Gamma Photon, and Dura Fast 26. 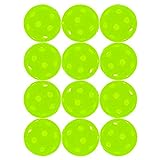 For recreational and competitive players alike, we thought you’d be interested in what pickleball balls the pros are using. The USA Pickleball Association has tested and approved almost 50 indoor and outdoor balls for use in official tournaments. If you’re serious about playing pickleball, we suggest picking up one of these balls.

An official ball is one that’s made of plastic and is between 0.78 to 0.935 ounces and 2.874 to 2.972 inches in diameter. There are no color restrictions other than the fact that the ball must be a single color. You may have noticed that yellow is the most popular color, but orange, white, and green balls are also common.

Here’s the full list of USAPA approved balls (we didn’t include the ones that are no longer made):

You might be wondering if there are any particular balls in the list above that are used in tournaments more often than others. The answer is yes!

For outdoor play, the Dura Fast 40 (formerly called the Dura 56) is the official ball of several large tournaments including the USAPA National Championships. 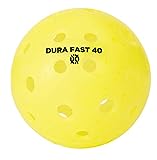 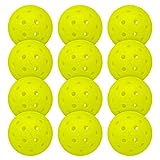 For indoor tournaments, the Onix Fuse indoor ball is one of the most popular ones. 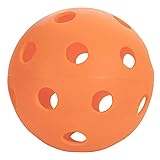 Official tournament balls can vary from year to year, even for the same tournament. If you want to know which ball is used for an upcoming tournament, your best bet is to check with tournament officials.

How Long Do Balls Last?

Outdoor balls eventually crack or go out-of-round. How fast they do depends on factors such as temperature and how aggressive players are with the ball. They can last anywhere from a couple of games to several months.

Indoor balls rarely crack or go out-of-round, but they’ll get soft. If you notice that the ball is playing slower and not bouncing as high, it’s time to replace it!

Now that you’ve chosen your ball, all that’s left to decide is whether to dink, lob, smash, or volley!