Kubb (pronounced “koob”) is the Swedish word for “block” and – besides being the name of the game – refers to the wooden blocks in the game. The game comes from – you guessed it – Sweden, where an annual tournament is hosted each year on the island of Gotland. The great thing about kubb is that it’s suitable for anyone between the ages of 4 or 5 years old to 90 years old or more!

Whether you’re looking for a fun, family-friendly, backyard/party game or want to learn and master the game to join a tournament in the future, you’ve come to the right place. We’re going to show you how to play kubb and answer some common questions about the game afterwards.

To win a game of kubb, you have to be the first team to knock over your opponent’s kubbs followed by the king.

You can think of a kubb as a knight. Their purpose is to protect the king and to get to the king, you have to knock down the knights first. This is important. If you accidentally knock down the king before taking down all of your opponent’s kubbs, you immediately lose the game!

You can buy pre-made kubb sets, but some people take the DIY approach and make their own. If that’s you, you’ll want to know the size of each piece. Here are the dimensions and weight of each piece that’s used in the official US National Kubb Championship: 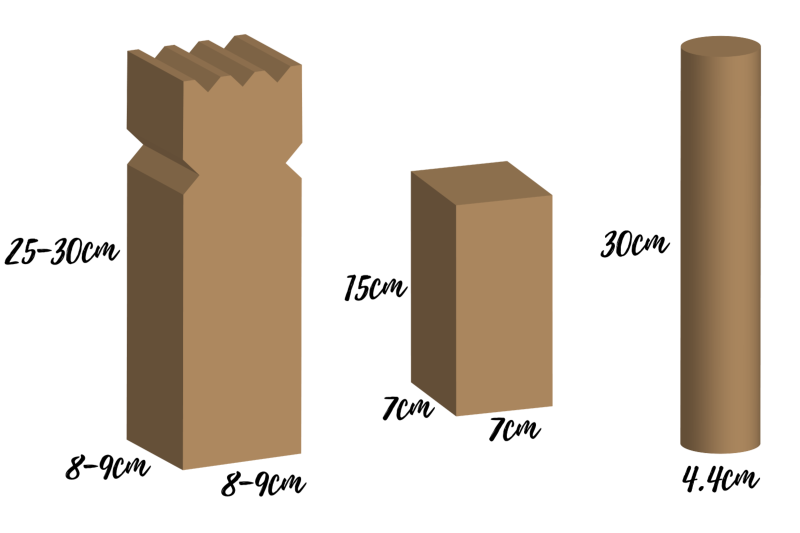 Kubb is played on a pitch that measures 8 meters by 5 meters. This is what most tournaments use. But you can definitely adjust the size of the pitch to make the game easier or harder. For young children, we suggest making the pitch smaller to about 5 or 6 meters by 5 meters. 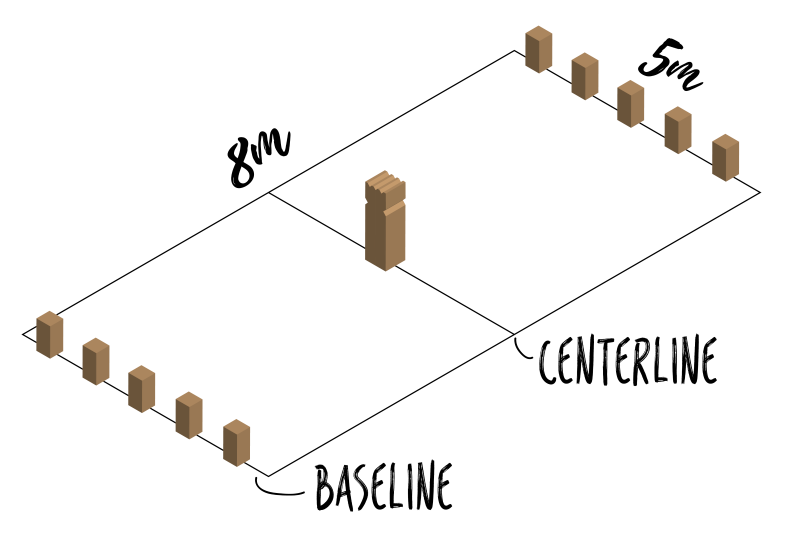 How to Play (6 Steps with Illustrations)

Before we learn how to play the game, it’s important to know how to throw batons and kubbs within the rules of the game.

First off, kubbs and batons must be thrown underhand. With kubbs, you can hold and rotate them however you want. But with batons, they must rotate end-over-end vertically. So called “helicopter” throws that rotate horizontally are illegal. If we go into specifics, the baton can’t go more than 45° off the vertical axis as seen in the image below. 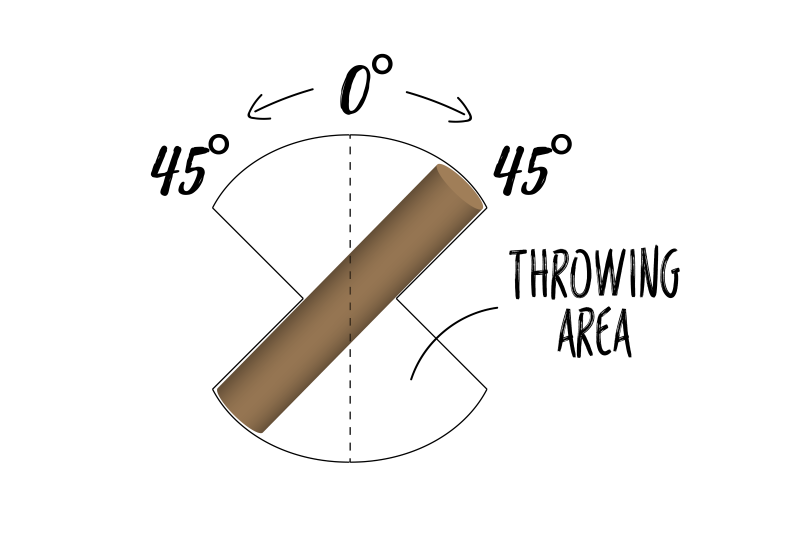 The rules don’t state that the baton must rotate. If you can throw without rotation and make the baton stay within the hourglass-shaped area, it’s a legal throw! However, many players find it easier to throw the baton with at least some rotation.

Kubb is played between two teams of 1 to 6 players.

In many tournaments, like the US National Championships, each team is required to have a minimum of 3 players. The number of players doesn’t have to match on both sides. For instance, you can have 3 players on your team while your opponent has 4 players on theirs.

To begin, teams will do what’s called a king toss. Both teams will throw a baton simultaneously and try to get it as close to the king as possible without knocking it over. 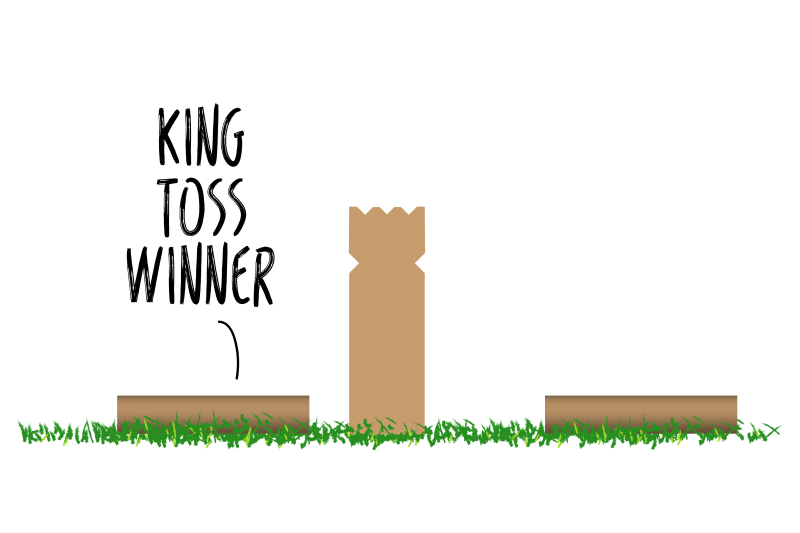 In a king toss, the baton can hit the king, but can’t knock it down. The team who knocks it down automatically loses the toss. If both teams somehow hit and knock the king down, or there’s a tie, then you re-do the king toss until there’s a clear winner.

Let’s say Team A won the king toss and decides to go first. They’ll try to knock down as many as Team B’s kubbs as they can from behind their baseline. 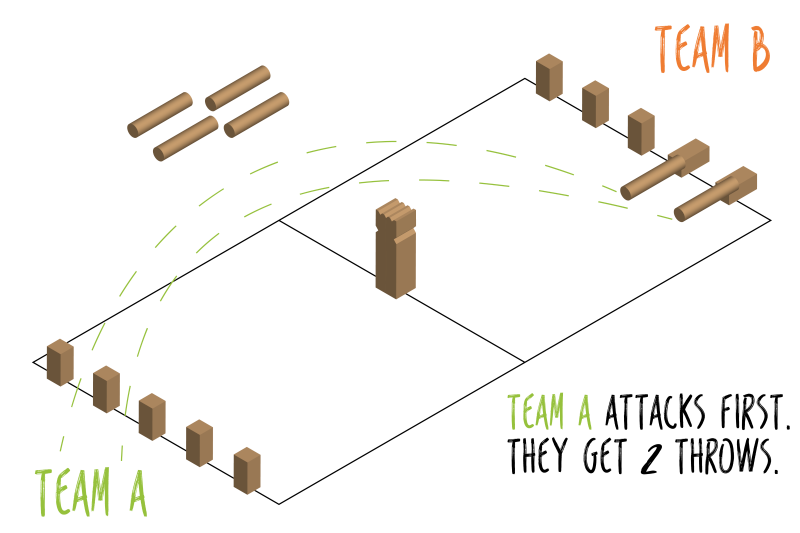 The 2-4-6 sequence is used in tournaments because teams would get a huge advantage if they can start by throwing six batons. Really good players would be able to topple all kubbs and the king before the other team even gets a chance to throw! As you can imagine, by winning the king toss and choosing to start first, they can win the game in their first turn.

If Team A throws two batons and doesn’t knock down any of Team B’s kubbs, then it’s Team B’s turn to throw four batons. But let’s say Team A was able to take down two kubbs (as shown in the previous illustration). Before Team B gets to throw, they have to “inkast” (Swedish for “throw in”) those fallen kubbs to Team A’s side of the pitch. 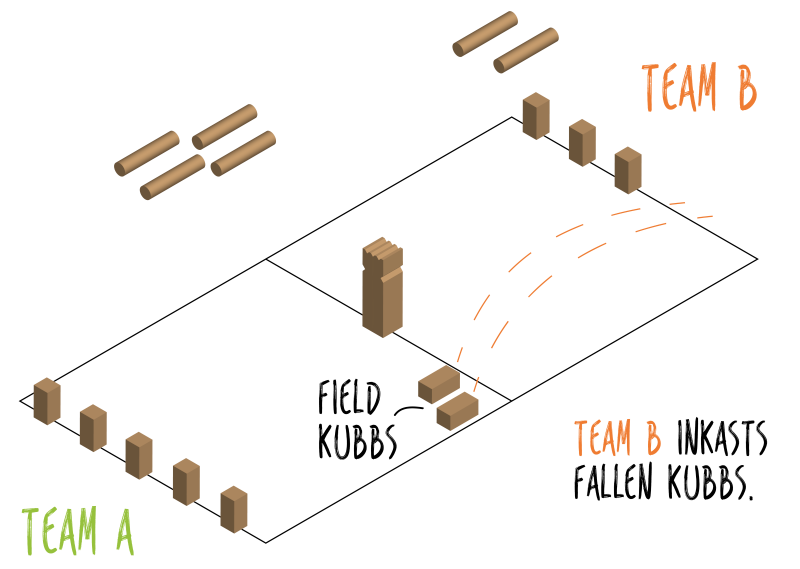 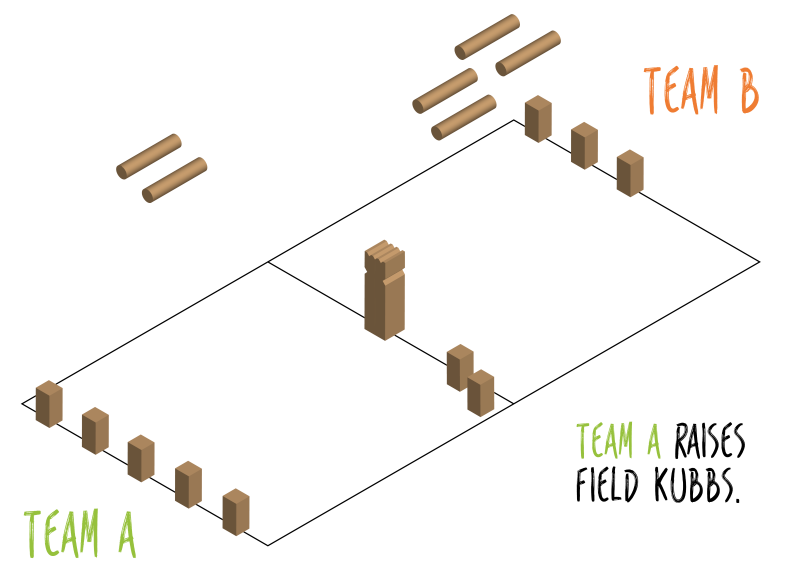 If any kubbs land out of bounds a second time, they become punishment kubbs. Team A can place punishment kubbs anywhere on their side of the pitch as long as they’re at least one baton length away from the king and any corner pitch marking stakes. As Team B has to knock down these kubbs (more on this later), Team A will want to put them somewhere that works to their advantage – for instance, close to the king.

Sometimes field kubbs land in a way where they’re obstructed – by another kubb, for example – and can’t be raised on one or both ends. The rules state that as long as the kubb can be raised in bounds on the unobstructed end, or by first raising another kubb to remove the obstruction, then it must be raised and doesn’t have to be inkasted a second time.

Those raised field kubbs essentially act as “defensive” kubbs for Team A. You can think of it like this: Team A knocks down and “captures” two of Team B’s kubbs which are now used as “hostages”.

Let’s say Team B knocks down both field kubbs along with two baseline kubbs. Team A would now have to inkast all four kubbs to Team B’s side of the pitch. Team B now has four “hostages” and it’s their turn to raise them. 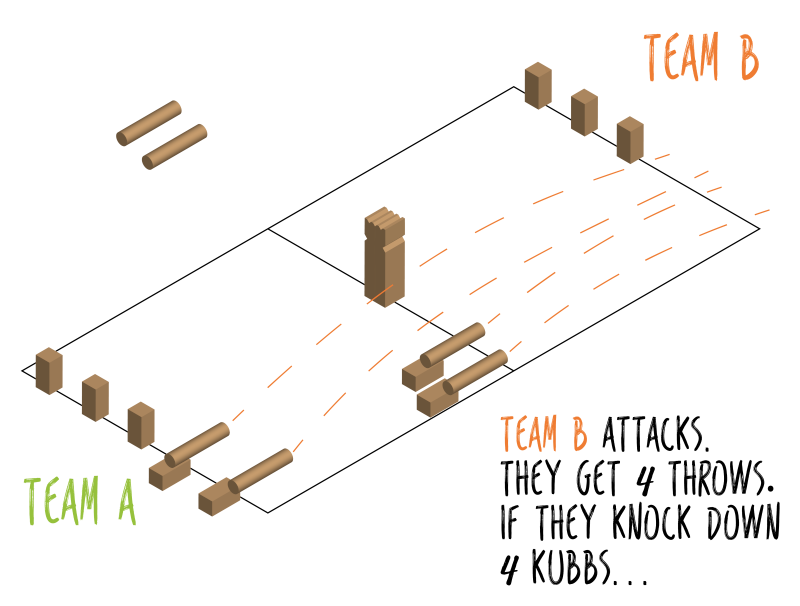 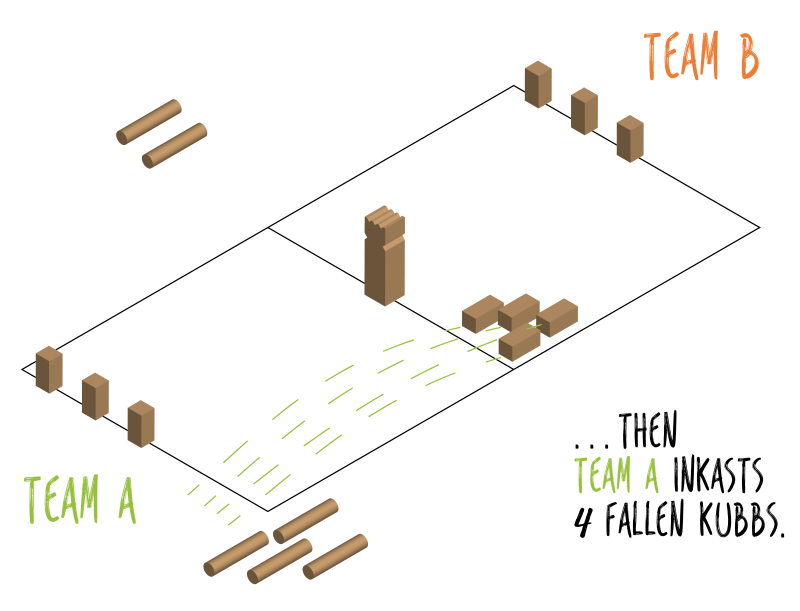 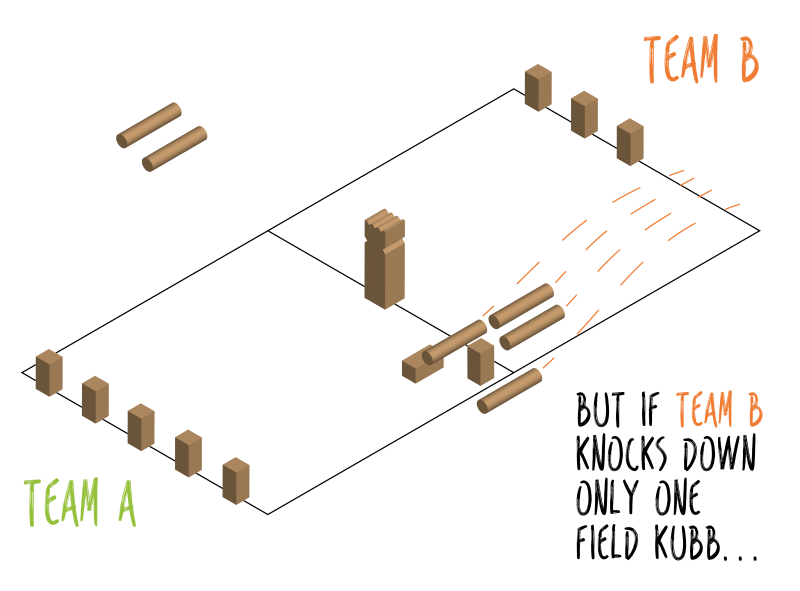 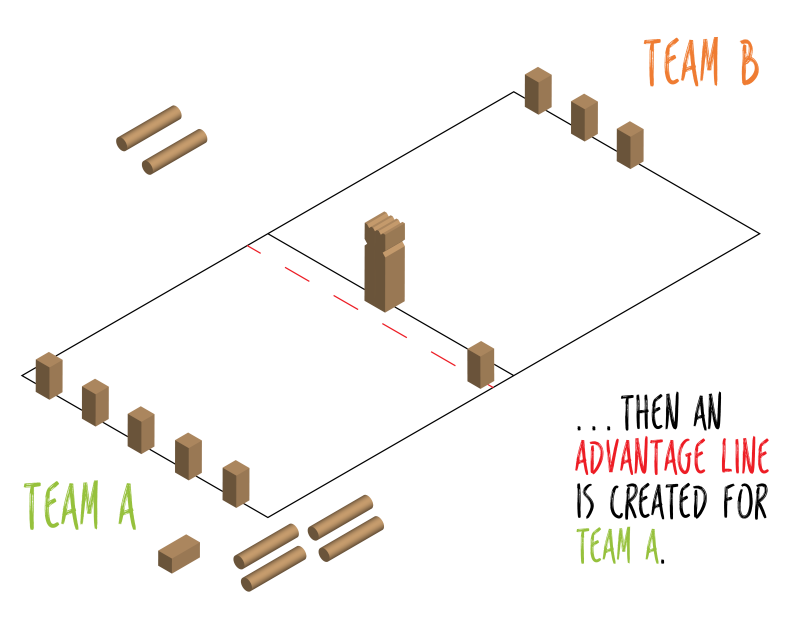 Team A inkasts the single toppled kubb to Team B’s side. Then when Team A goes to attack again (now they have six throws), they’re allowed to advance to and throw from behind the advantage line. In a way, it’s like Team A is able to advance because they have a hostage to use as a “shield”. This is why it’s important to take down every single field kubb by the end of your turn! 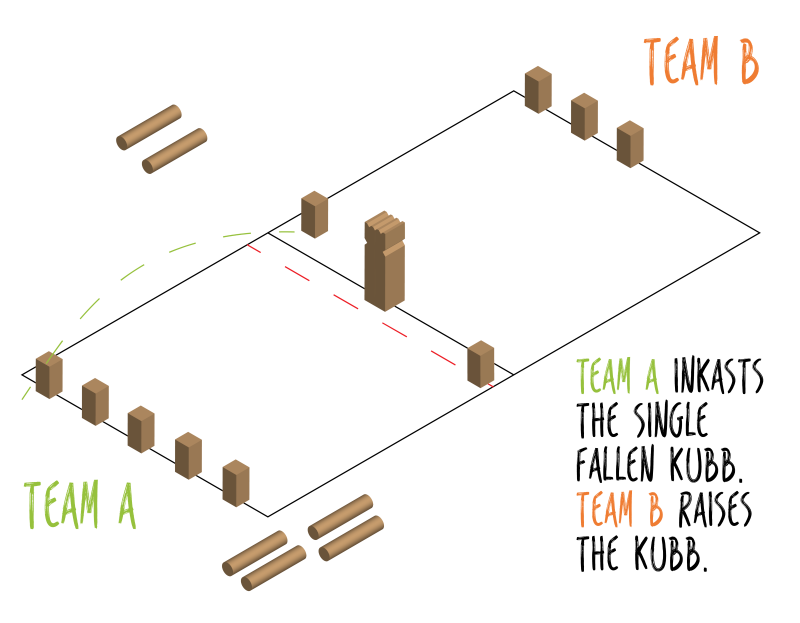 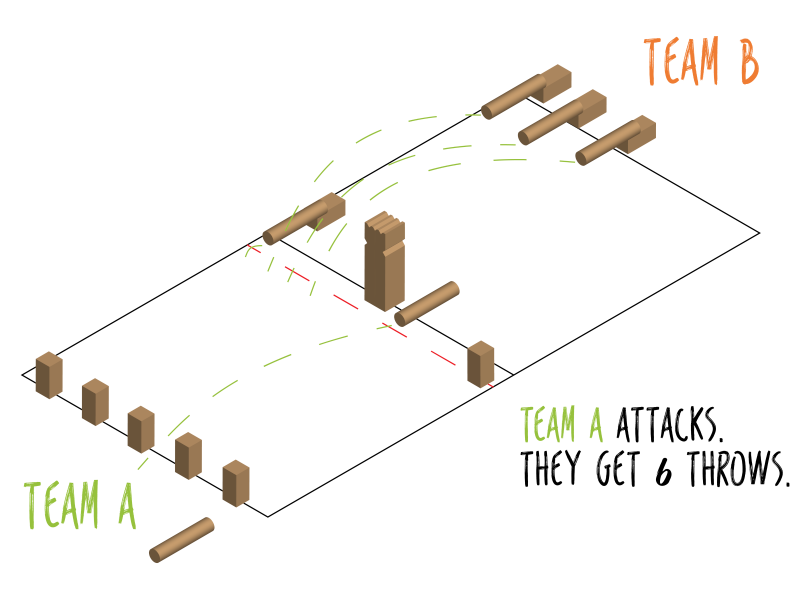 The two teams take turns knocking down field/baseline kubbs and inkasting/raising kubbs until one team knocks down every single one of their opponent’s kubbs. Then all that’s left is to take down the king and declare a winner! Any attempts to topple the king must be made from behind the baseline (never behind an advantage line). 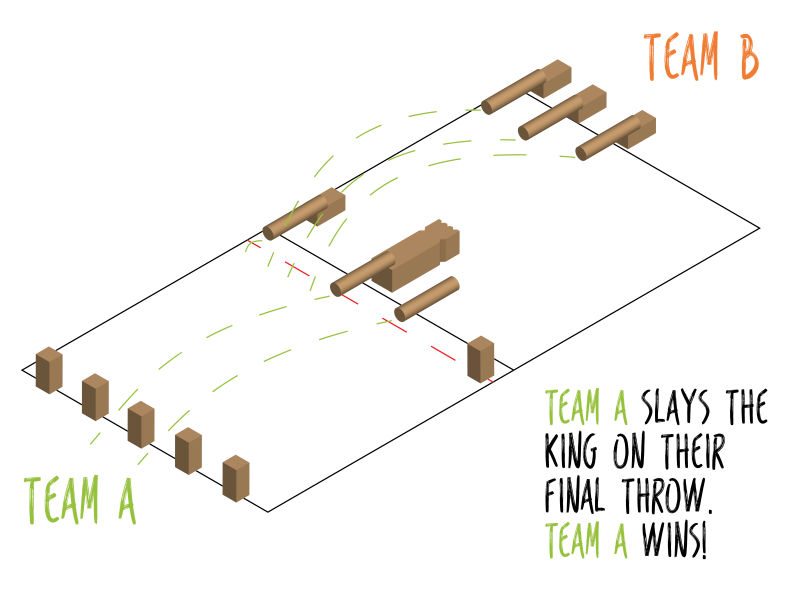 Now we’re going to go over some common questions players have about the game. We hope that these answers will help clarify any confusion you may have about certain rules and suggest tactics that you can use.

Don’t field kubbs get removed from the game?

Many people learn to play the game by removing field kubbs after they’ve been knocked down (so that they’re inkasted only once). In fact, the kubb set that you pick up from the store may include this rule in the instructions. You can definitely follow this rule if you wish. But in most tournaments, field kubbs stay in the game. This is to make the game more challenging.

Can you knock down more than one kubb in the same throw?

Yes. You can topple multiple kubbs in a single baton throw.

Can you knock down a field kubb and a baseline kubb in the same throw?

A sure shot is an upside-down throw made at the king. You throw with your back facing the king, between your legs. While not a part of the main rules, some people include the sure shot for fun. You may also encounter tournaments that specify that the king must be taken down with a sure shot.

If inkasted field kubbs hit each other, can you stack them?

We know of several variations of rules about what happens to inkasted kubbs when they hit each other. One of which is that you’re allowed to stack them on top of each other and therefore create an easier target to hit. Official tournaments don’t use this rule, but you can implement it for fun, especially if you want to speed up the game. The better you get at playing kubb, the less you’ll want to stack because it makes the game too easy.

Can you stand beyond the sidelines when throwing?

No. The sidelines extend beyond the baseline. Both your feet have to be within the sidelines to throw.

A good place to inkast field kubbs is near the sideline, just beyond the centerline. This is a good location because it’s away from the king and prevents you from hitting it accidentally. Plus, it forces your opponent to raise the kubbs closer together. If field kubbs are inkasted to an open area (away from the lines), your opponent can more easily “disperse” them when they go to raise them, making it harder to strike several in one throw.

Can you play kubb on concrete, at the beach, etc.?

Kubb can be played on grass, sand, and even snow! These surfaces absorb impact well and won’t damage the wood. However, we don’t recommend playing on concrete or any other paved surface. They’re too hard and cause your pieces to bounce all over the place, potentially causing injury.

Is kubb a Viking game?

While the Vikings are known to have played board games in their spare time, there are no records of them playing kubb. As far as we know, kubb only dates back to the late 20th century when commercial sets were made for sale. Then in 1995, the first kubb tournament was held in Gotland, Sweden. However, given the similarities, it’s likely that kubb was inspired by ancient throwing games like skittles.

Before we let you go, we want to show you a video of a tournament game. It’s probably a lot easier to understand the game fully once you’ve seen someone play.

In this video, the game opens with a 3-6 sequence and the sure shot rule applies.