Mölkky is a simple Finnish throwing game that’s easy to learn, easy to play, and can provide hours of fun for the whole family. How about introducing Mölkky at your next summer barbecue, backyard party, or family gathering? We have a feeling it’s going to be a hit!

To win a game of Mölkky, you have to be the first team to score exactly 50 points. If a team’s points exceed 50, set their points back to 25 and continue playing until someone reaches 50. 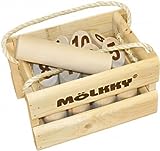 You can probably purchase Mölkky sets at your local game store, but if you can’t find them or want to take the DIY approach and make your own customized set, here are the dimensions of each piece as specified by the International Molkky Organisation (IMO): 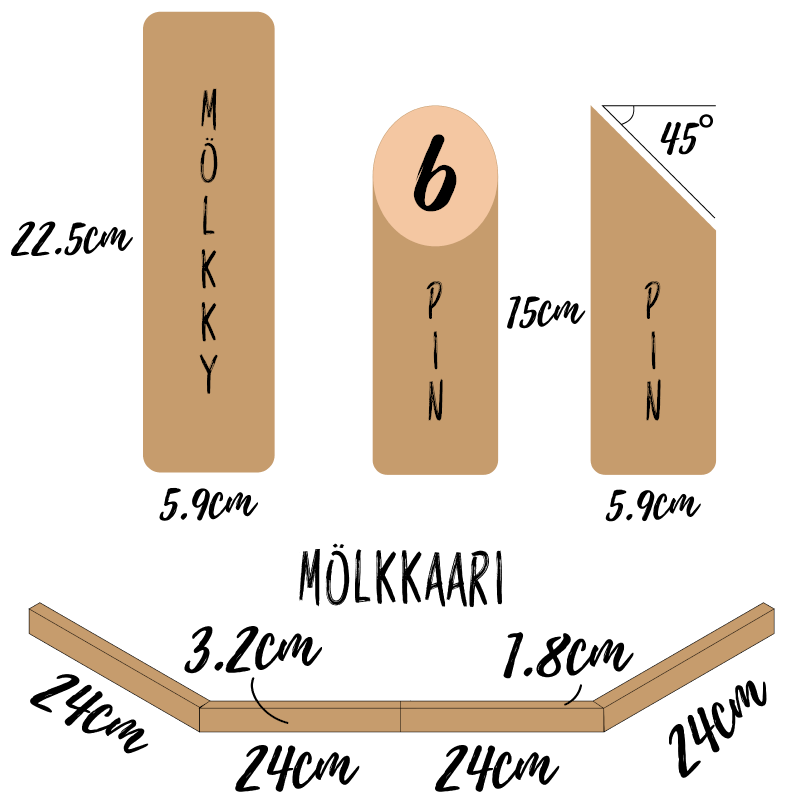 Place the Mölkkaari on the ground and angle the end pieces at roughly 45° to form a trapezoid. If you don’t have a Mölkkaari, use something else as the throwing line. Then place the numbered pins at a distance of 3.5 meters from the Mölkkaari. 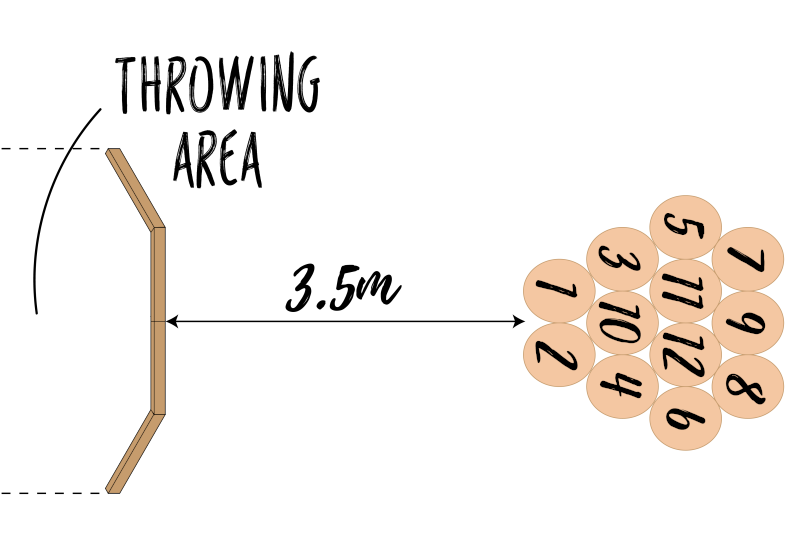 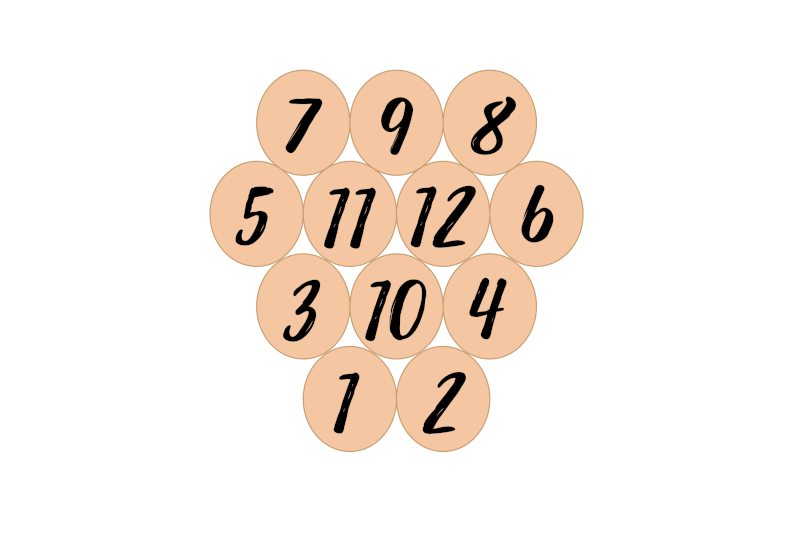 You score points by knocking down the numbered pins with the Mölkky:

Only fallen pins count. A pin leaning against a fixed object (wall, tree, etc.) or another pin is not considered fallen and doesn’t count. It doesn’t matter if the Mölkky hits the pins directly or indirectly – they count as long as they’re knocked down.

You can throw the Mölkky however you want – underhand, overhand, etc. But you have to throw within the throwing area. Touching or moving the Mölkkaari, or stepping out of the throwing area while throwing will be counted as a misthrow.

A misthrow also means a throw that doesn’t knock down any pins, thus scoring zero points. If a team has 3 misthrows in a row, they’re eliminated from the game. If every team but one gets eliminated, the last team standing wins!

Course of the Game

After each throw, stand the pins up wherever they fall, without lifting them off the ground. When doing this, turn the pins so that the numbers can be seen from the throwing area.

Instead of a single game, you can play a best-of-three or a best-of-five game format. It’s really easy to spend a whole afternoon playing Mölkky. 🙂

You now know how to play Mölkky! But we thought it’d be useful to give you a greater understanding of the game by including answers to some frequently asked questions.

Is Mölkky the same as Finska?

Yes, they’re the same game. It’s just that Mölkky is a trademark (not unlike Kleenex) that is owned by the Finnish game company Tactic Games Oy. And, likely to avoid infringing on rights, you might see the game sold under the name “Finska” and other brand names instead.

Instead of a coin toss, a Mölkkout can be used to determine which team gets to start. It’s like a mini game of Mölkky. Since it’s more complicated than a coin toss, Mölkkouts are used mostly in tournaments rather than recreationally.

In a Mölkkout, the number 6, 4, 12, 10, and 8 pins are placed one after the other (in that exact order) in a straight line. They’re spaced one Mölkky length apart. The number 6 pin is placed at a distance of 3.5 meters from the Mölkkaari. It should look something like this: 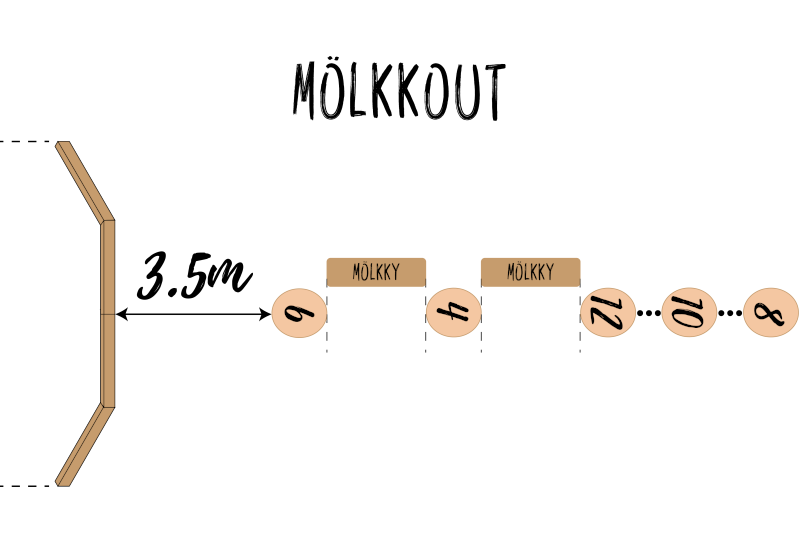 Like a regular Mölkky game, teams take turn knocking down pins and collecting points. The scoring method is the same. However after each throw, you put the pins back in their starting position.

Whoever throws first gets one throw. And then teams take turns throwing twice until each team completes their throws. In other words, the throwing order between two teams (A and B) would look something like this:

See how complicated a Mölkkout is? The funny thing is that a coin toss usually determines who throws first in a Mölkkout. If you’re playing Mölkky for fun, we suggest simply using a coin toss to determine the throwing order.

The 37-points rule is another feature of the game that’s used mostly in tournaments. If a team has 37 or more points, their score will revert to 25 points if they commit one of the following faults: trespassing, wrong player sequence, wrong team sequence.

Trespassing is the official term for touching or moving the Mölkkaari or stepping out of the throwing area while throwing. This is normally counted as a misthrow. But when the 37-points rule is applied, the team’s points get reduced to 25 for committing this fault.

Why is this rule necessary? Let’s say a team has 45 points and needs only 5 more to win. They throw and hit the number 8 pin, which gives them 53 points. By exceeding 50, their points get reduced to 25. But if they intentionally “trespass” by touching the Mölkkaari, it’s counted only as a misthrow without the 37-points rule, and the team stays at 45 points and gets another chance to throw and win. So the 37-points rule prevents this sort of unsportsmanlike behavior.

A wrong player or team sequence is when a player or team throws when it’s not their turn. These are counted as misthrows too (zero points). But usually in casual games, players would remind each other of whose turn it is so that misthrows in this way don’t occur.

What is the best playing surface for Mölkky?

The best playing surfaces for Mölkky are sand, gravel, or crushed stone fields. These surfaces are relatively flat, allow the pins to stand upright, allow the Mölkky to roll, and offer a bit of cushioning. The second best surfaces are brick, concrete, and other paved surfaces.

Your playing area should be at least 10 meters by 4 meters large, starting from the throwing line. Pins will spread out as the game progresses so you want to make sure your playing area is a good size.

We hope you’ll enjoy playing Mölkky as much as we do. The rules are simple and you can teach the game to others in a matter of minutes. Anyone between the ages of 5 or 6 years old to 90 years old or more can play Mölkky, making it the perfect outdoor game for the whole family.